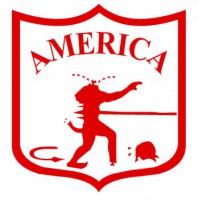 ¿Why does a Christian is a fan of a team whose shield is the devil? 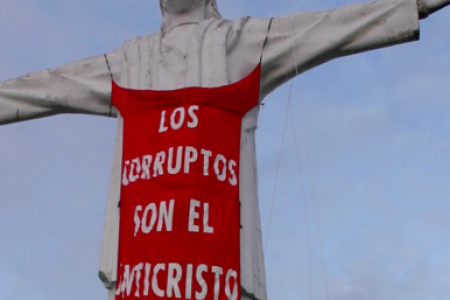 I know it is a disgrace for a believer in Christ your heart team has on his shield the enemy of our souls, .... then wield the justifications why I am a follower of this football team Vallecaucano.
First of all, I think not be the only Christian supporter of the football team ... truth be told ... and respecting the opinions of many, for me, America De Cali is the team of my childhood and youth.
Stop being a fan of the Mechita for me, it is to leave a part of my identity and that now, the team needs the cooperation of every fan and follower, as it is in the second division of Colombian Professional Soccer.
Many exclusive comments from people of authority in churches and on the subject of football in particular to America of Cali, has made me prey to negative comments and harassment such as that can be an idolatry that I have not left my heart, Agents of Satan, etc., computer After much reflection and meditation for me, would be a case of total disloyalty myself to turn away the Club to which I still since childhood, as irony is that my passion for red Valle was not instilled by my parents or relatives, none is a fan of my team, even most of my family does not like football (Except for my father who managed to play at the professional level), America de Cali touched my Heart in the neighborhood, in the dusty or muddy field, in friendship, in singing goal that was heard at home when the Pascual Guerrero stadium became a goal, and who lived a few blocks away, slowly I did go filling me with pride, saying that Red Sultana del Valle was my team Favorite.
View play Julio Cesar Falcioni, El Tigre Gareca, Cabins, Battaglia, Alex Escobar, Fredy Rincon, Wilmer Cabrera, Anthony de Avila, the Moth Da silva, and later when I began to take seriously the understanding of the game, to imitate men, Raul Balbis, Ischia, Wilson Pérez, Usuriaga, Leonel Alvares or Mazziri Foad was filling my need to be part of a football team; all the good that has to do with this beautiful sport of soccer, has given me the America of Cali.
So many triumphs and joys have filled my heart with satisfaction follower of this team going to the stadium, seeing the happy faces of the children, the old, women of all ages that adorn the grandstands, learn how to appreciate the older tactics and the movements of the players and then practice them in the park until the evening hours, Rejoice watching the game, giving support and encouragement to the players, all this and more, had to do with something that is trivial to many as it is, being a follower of a Football team.
Daily prayer is, I think all American fan who loves God and Jesus Christ as our personal Savior and unique enough so that this Club AMERICA DE CALI CORPORATION OR CORPOAMERICA SA or whatever you want to call or be called .... placed in the hands of men and suitable, God-fearing women, which we Remove the curse of being named as the enemy of our souls, that his shield was free of that dark Yoke become a messenger of life and blessing.

The Doctor Gabriel Ochoa Uribe can remove While directing the Technical and sport of the club, El Pipa de Ávila, he wore gauze that covered this undesirable Silhouette, when leaving the court, could name many players like Zapata, who feel or felt Pena because the team they love bear this burden flawed,
Unfortunately for everyone, men devoid of understanding, believe it is banal and mysticism taken as the fact that the devil is an iconic figure of the club .... well, there are too many fans in this country who want an America of Cali Free This fact born of the contemptuous description of the black players on the court.
It is the campaign yours truly, as a follower of this team, America de Cali, is free to be a propaganda tool of the enemy of all mankind.
I hope Brother in Christ, believers in God, beloved pastors, members of Christian congregations, Evangelical, or any name of sound doctrine where Jesus Christ is the ultimate authority, not to exercise the hammer of judgment on this task.
Just I hope understand what it means to be a follower of a football team. Right or wrong, I hope your understanding and are included in their prayers and says:
(Proverbs 16: 1-4):
Man is the provisions of the heart; But Jehovah is the answer of the tongue
All the ways of a man are clean in his own eyes; but the Lord weighs the spirits.
Commit to the Lord whatever you do, and your plans will succeed.
Blessings! I welcome your comments to edification, and not destruction.


Get Your Own Free Hypster.com Playlist.